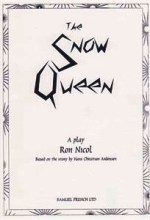 A faithful adaptation of the Hans Christian Andersen favourite. Gerda searches for her friend Kai when he's kidnapped by the Snow Queen. With the help of a Crow and a Reindeer, she travels to the far North and confronts the Queen in her ice palace.

"enchanted the young and young-at-heart alike … this magical production takes you on a heartfelt frozen adventure ... filled with fun characters and great laughs” (SVC News, California) “An endearing, heartfelt story … a fun and zany adventure … a wonderful play about never giving up and the power of friendship” (Along Comes Mary) “Filled with heart, adventure and laughter ... sure to charm younger and older audiences alike” (Santa Clarita Guide) “A great show for kids and grandkids, full of adventure and laughter for everyone!” (Santa Clarita Magazine) "our audiences were entranced..." (Ottershaw Players); "a magical dramatisation" (Stourbridge News); "a new and exciting version of the classic fairy tale" (Chads Theatre); "a delight for family audiences" (Scene One); "spellbinding" (Lowestoft Journal); "magic ... really captivated the audience" (Highbury Players); "sell out audiences" (Everyman Theatre); "a fairy-tale treat" (Arts Archive); "really cool" (Huntingdon Youth Theatre)
"The Snow Queen" was Samuel French's Play of the Week 30 January 2014

An adaptation of the Charles Dickens favourite. Miser Ebenezer Scrooge is haunted by the ghosts of Christmas Past, Present, and Future. Glimpses of his past life, visits to the happy households of his clerk and his nephew, and fearful visions of the future make him change his miserable nature.

"...innovative treatment of a well-loved story...accessible to every size of society and venue." (Amateur Stage)

Productions in Britain and the USA