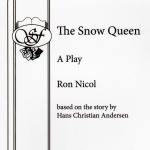 An adaptation of the Hans Christian Andersen favourite. Gerda searches for her friend Kai when he's kidnapped by the Snow Queen. With the help of a Crow and a Reindeer, she travels to the far North and confronts the Queen in her ice palace.

An abridged version of Ron Nicol's full-length adaptation of "The Snow Queen".

Adapted from the Charles Dickens story. Ebenezer Scrooge is only interested in making money, and sees Christmas as an excuse for idleness and the expectation of charity. His former business partner Jacob Marley appears to him in ghostly form, warning Scrooge that if he continues in his avaricious ways he’ll be unable to escape a miserable fate. That night, Scrooge is visited by the Spirits of Christmas Past, Present and Future. Glimpses of his past life as a young man, visits to the happy households of his clerk and his nephew, and fearful visions of the future persuade Scrooge to change his covetous nature.

Adapted from the Charles Dickens story and set in London in the 1840s - the "Hungry Forties". One New Year’s Eve, Trotty Veck is filled with gloom at reports in the newspaper about crime and immorality, and wonders if the working class is wicked by nature. His doubts increase when encounters with Alderman Cute and MP Joseph Bowley confirm that the poor are ungrateful and have no place in society. Meeting homeless vagrant Will Fern and his orphaned niece Lilian, Trotty offers them his hospitality. That night Trotty is summoned to the church by the Bells, who in a series of visions show him how dismal the future is, with Richard becoming an alcoholic, Lilian descending into prostitution, and Meg  driven to contemplate suicide. In despair, Trotty confesses to all his doubts. He wakes to find that the visions are only dreams, and that the New Year has dawned.

THE CRICKET ON THE HEARTH

Adapted from the Charles Dickens story. John Peerybingle has a much younger wife, Dot. When a mysterious stranger arrives, John suspects that Dot and the newcomer are secret lovers. Meanwhile, Caleb Plummer’s blind daughter Bertha, in love with Caleb’s tight-fisted employer Tackleton, learns that Tackleton is about to marry her friend May Fielding. Then John makes a discovery that seems to confirm his suspicions. The Cricket on the Hearth attempts to dismiss John’s doubts with a series of visions. Eventually it’s revealed that the mysterious stranger is Caleb’s missing son Edward in disguise, who has returned to claim his childhood sweetheart May. Thanks to Dot’s intervention, Edward marries May, Tackleton gives his blessing to the marriage, and John and Dot are finally reconciled.

THE MAN WHO COLLECTED WOMEN

A Sherlock Holmes adventure in one act based on Sir Arthur Conan Doyle’s short story “The Illustrious Client”. When the unscrupulous Baron Gruner persuades impressionable heiress Violet de Merville to marry him, Lady Hilda Damery approaches Sherlock Holmes for help. With the assistance of Mary Watson, underworld contact Annie Johnson and the Baron’s discarded mistress Kitty Winter, Holmes comes up trumps. Despite being assaulted and left for dead, he steals Gruner’s diary of conquests and prevents the Baron adding to his collection of betrayed women, while Kitty takes her own drastic revenge.

A Sherlock Holmes adventure based on Sir Arthur Conan Doyle’s short story “The Adventure of the Mazarin Stone”. Countess Natalia Sylvina steals a fabulous diamond and Sherlock Holmes is determined to get it back, with the help of Dr Watson's wife Mary. The Countess and her strong-arm man Sam Merton confront the great detective in his consulting rooms at Baker Street. Sylvina belives she has the upper hand, but is tricked by the use of a dummy into revealing the whereabouts of the fabulous jewel. Mary arrives with the police, the villains are arrested, and Holmes returns the Stone to Lady Cantlemere.